You are at: Home » Waste Industry News » Should You Haul Trash to the Dump Yourself or Rent a Dumpster?

Should You Haul Trash to the Dump Yourself or Rent a Dumpster?

Cleaning up after a home project can be a big task in its own right. Even relatively minor jobs can leave you with thousands of pounds of debris: a single old microwave can weigh 50 pounds, while an outdated countertop can weigh up to 20 pounds per square foot.

You can either rent a dumpster to get rid of this debris or go fully DIY and haul it to the dump yourself. Use the comparisons below to decide which option makes the most sense for your project.

Renting a Dumpster vs. Going to the Dump: The Basics

Your first step in deciding whether renting a dumpster or hauling your trash to the dump is the best choice is to compare both options based on three important factors.

*Note: Available dumpster sizes and weight limits vary by location. Research sizes in your area before making a decision.

To give you a better sense of what each option can hold, the chart below shows how many dumpsters or pickup truckloads are needed to haul the average amount of debris produced by a few common home projects.

*Note: weight limits vary by location. Research specifics in your area before making a decision.

As these charts show, going to the dump might be worth the effort if you’re dealing with less than 1,000 pounds of debris. However, renting a dumpster would be a better choice for anyone tackling a larger project or who can’t spare the time to make multiple trips to the dump.

How Much Does It Cost to Take Debris to the Dump?

Price is also an important factor in determining if going to the dump yourself is the best choice. The exact cost to go to the dump will depend on the rates charged by the landfill in your area and how their pricing structure works. Landfills typically charge by weight, but their rates can work in a few different ways:

Regardless of which pricing structure is used, be aware that unless you know the exact weight of your debris, you won’t know the final cost until you’re already at the dump—and already locked into paying whatever the total is.

While some dumpster rental companies also charge by weight, others charge a flat rate up to a specified weight limit for each dumpster size. This means that you’ll know the total flat-rate cost of a dumpster rental up front, making it easier to budget for disposal.

Renting a Dumpster vs. Going to the Dump: The Verdict

Hauling trash to the dump yourself makes sense if you have only one or two pickup truckloads of debris to get rid of, don’t mind pausing your work to make more than one trip, and are comfortable with not knowing the total cost of disposal ahead of time.

But for any project with more than a couple of pickup truckloads of debris, a dumpster rental will save you time and effort, and give you the peace of mind of knowing upfront what the final cost will be. If you’re considering a dumpster rental, give Budget Dumpster a call at 1-866-284-6164 for more information on pricing and sizes in your area.

What’s the Right Way to Dispose of Old Paint? 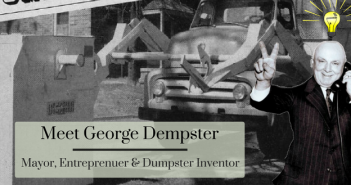