You are at: Home » Environmental Innovators » Strength in Small Numbers: Missouri River Relief Cleans Up Omaha and Council Bluffs

Every other year, Missouri River Relief visits Omaha and Council Bluffs for a major river cleanup. Following the historic 2019 flooding events, these cities were paid a much-needed visit this year. Due to COVID-19 safety restrictions, the event became a three-day affair, with small groups restoring different parts of the Missouri River each day. 2021 marks the organization’s 20th anniversary, and a large-scale cleanup was a fitting way to celebrate.

Founded in 2001, Missouri River Relief conserves the “Big Muddy” by engaging with local communities. They put on a number of events every year, including educational seminars, recreational programs and hands-on river cleanups. Over the last 20 years, they’ve established a community of river lovers who protect and restore this important freshwater resource.

More than 3 million Missourians depend on the Big Muddy for fresh water to shower, water their plants and stay hydrated. The Missouri River is vital to the region, for both the local population and the wildlife that inhabit it.

To protect this important resource, Missouri River Relief holds volunteer cleanups throughout the year. In two decades, they’ve had close to 30,000 volunteers cover 1,400 miles and remove 970 tons of trash from the river and banks nearby.

Budget Dumpster first partnered with Missouri River Relief in 2016, when we provided dumpsters for their Kansas City cleanup. This year, volunteers removed 8.2 tons of litter from the Big Muddy with the help of two 30 yard dumpster donations. 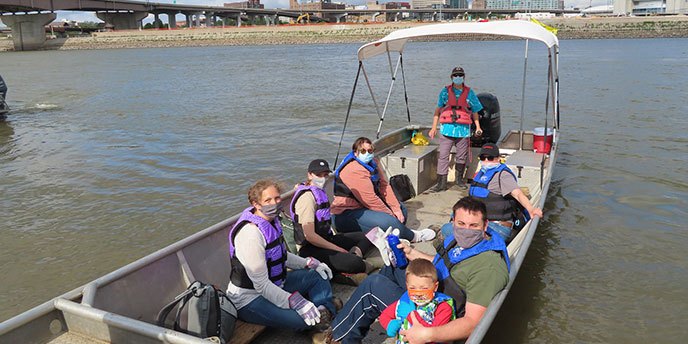 Over the span of three days, partners, sponsors and volunteers de-littered Tom Hanafan River’s Edge Park and the Fontenelle Forest. The event kicked off on Friday, May 20th, in Council Bluffs and concluded the following Sunday in Omaha. While restoring the banks was Missouri River Relief’s primary goal, each cleanup had its own initiative and impressive results.

“We’ve had COVID-modified cleanups for over a year now, and the results have been great. With this model, we’ve picked up more trash than ever before. We’re spending more time in the field now, and our dedicated volunteers really know what they’re doing.”

A popular public spot, Tom Hanafan River’s Edge Park is often used for festivals, concerts and leisurely strolls. Located right near Council Bluffs’ 40-mile trail system, it gets a lot of recreational use, especially during the summer months.

Missouri River Relief’s Kevin Tosie shares, “Tom Hanafan is right near downtown, and I wanted the cleanup to be visible and accessible. Some of our volunteers will travel and others want to stay close to home, so this was a good meeting spot for everyone.”

The park’s entrance is near the foot of the river, directly beneath Bob Kerry Pedestrian Bridge. This 3,000-mile stretch connects Omaha and Council Bluffs, and it was the meeting spot for 20 partners and corporate leaders when cleanups began that Friday.

Luckily, this group had near-perfect weather conditions. A few volunteers stayed near the bridge to collect litter, but most boarded one of five boats and were taken to cleanup sites, where they pulled out bottles, furniture and a tractor tire. They made plenty of headway for Saturday’s cleanup crew, covering five miles and placing them within reach of Omaha’s shoreline.

The following day, a new group of volunteers picked up where Friday’s cleanup left off, covering a 10-mile river stretch. While they didn’t reel in a tractor tire, they removed an astounding amount of Styrofoam from nearby marinas. A whopping 257 Styrofoam blocks were found in Sandpiper Cove, an abandoned harbor near downtown Omaha.

“Saturday’s cleanup was more volunteer-focused. We ‘trash scouted’ the night before, making sure the area was family-friendly, had a high trash density and was free of Poison Ivy.”

Despite poor weather conditions, this group made the most of their day, as they filled two and a half 40 yard dumpsters with Styrofoam alone. In addition to their Styrofoam haul, they pulled tires, blankets and appliances from the water, preventing this debris from going downstream. 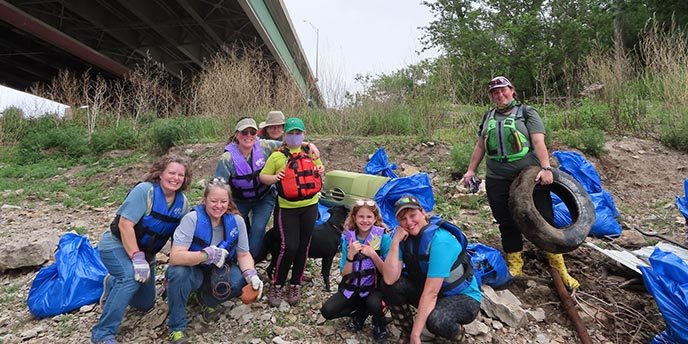 With their partners at Fontenelle Forest, Missouri River Relief cleaned the five miles between State Park Boat Ramp and Veteran’s Memorial Bridge. This particular stretch is prone to flooding and was ravaged by floods in 2011 and 2019.

“They called it a ‘100 Year Flood,’ but we’ve seen two of them in the past 10 years. There are seven dams on the river that regulate water levels, and they can’t handle some of the snow and rain showers we see upstream, which makes flooding pretty common.”

Like the previous days, volunteers’ trash haul was very impressive. They pulled multiple appliances, bins and furniture from the banks and filled a 30 yard dumpster with litter. A 20-foot culvert pipe, which allows water to flow under roads and trails, was also recovered. With many Missouri homes bordering the Big Muddy, these volunteers plan to put the culvert to good use.

Overall, 213 trash bags, 60 yards of Styrofoam, 11 tires, 37 containers and countless pieces of street litter were pulled from the Missouri River. At the end of the weekend, our dumpster rentals hauled away 8.2 tons of trash and debris. To view the entire trash tally, check out Missouri River Relief’s event recap.

As a continued celebration of their 20th anniversary, the nonprofit will host a “Big Muddy Clean Sweep” in the fall, de-littering 193 miles of the river between Kansas City and Columbia. For this cleanup event, they plan to tackle trash-prone areas they haven’t been to before.

Give Back to Your Community

Looking for ways to volunteer in your community, or want to plan a neighborhood cleanup of your own? These helpful guides will help you get started:

Giving Back in Cincinnati: Community Cleanups in the Time of COVID-19

How to Build a Mudroom You and Your Family Will Love