You are at: Home » Home Staging & Moving » Unpakt Emerging as a Better Way to Move

Unpakt Emerging as a Better Way to Move

Moving is a pain. Packing up rooms full of boxes, moving the “I didn’t know this was so heavy” couch and then reversing the whole process a short time later is a major hassle. The physical, emotional and financial burden often makes it about as desirable as a 4:30 meeting on a Friday afternoon.

See moving entails a lot of, well, moving parts. From finding a moving company, to even getting a ballpark number of what it’s going to cost, the moving industry has become somewhat of a wild, wild west (it’s almost as bad as the movie). Thankfully, someone decided to do something about this laundry list of problems. A game-changing service by the name of Unpakt is taking (most) of the pain out of moving by allowing users to compare flat rates, not quotes, of different moving companies. It doesn’t end there for the New York-based startup, which is steadily growing and reaching new customers by the thousands.

Unpakt has been called the Kayak or Yelp of moving. I would call it the “Kayak + Yelp” of moving. The site’s interface makes it easy to get through the booking process in just a few minutes. So if you’re willing to take a short break from your Netflix marathon and give a moderate level of effort, you can start moving with Unpakt.

When you log onto Unpakt.com, it has you start by entering some basic details such as the size of your move and where you’re moving to and from. It then has you add the number of boxes and items included in the move, whether it’s as small as a table lamp or as large as a king size mattress. When that’s wrapped up, and the exact moving addresses are entered, you’ll get a list of local companies willing to move your stuff. Each mover comes with a unique grade and statistics like their number of trucks, employees and years in business. The best part: flat-rate, upfront prices are listed from lowest to highest, allowing you to easily compare movers. From there, it’s as easy to complete as buying a pair of shoes online. All transactions go through Unpakt, and they take a margin of the overall cost once it’s all said and done.

While a customer friendly website is a nice add-on, price is ultimately what will bring in new and returning customers. Unpakt knows that and features unbeatable prices in many of their markets. So whether you’re as single as a Taylor Swift song or packing up the belongings of the Brady Bunch, Unpakt provides a fresh alternative to the oftentimes painful process of moving.

Unpakt vs. Other Moving Companies

The moving industry is worth an estimated $12 billion each year. Naturally, there’s going to be some competition. Sites like MovingHelp.com and HireAHelper.com offer similar services, but Unpakt’s full-service approach sets it apart from the competition. Unpakt’s interface is the easiest to navigate and to compare prices and reviews of a variety of moving companies. Its success has been reliant upon its transparency, which was virtually nonexistent in the industry before CEO Sharone Ben-Harosh founded Unpakt in 2010. No one wants a moving company that resembles their shady ex and with Unpakt those worries go out the window.

And how about guaranteed prices? It’s easy to relax when you know what you see is what you get. Same goes for the reliability of the actual people who will be moving your personal items. Unpakt features a list of vetted movers, thus its reliability matches its other standout features. If you look around at other sites or call individual moving companies, you’ll soon realize what an incredible, positive influence Unpakt is making on the moving process.

THE FUTURE OF MOVING

Much like other industries have found success in creating comparison sites, like travel and food, it would appear moving is headed in the same direction. Unpakt is already in over 300 cities and has served over 250,000 customers. The dramatic growth since its launch in 2012 can be attributed to ease of use and people’s overall desire for this kind of service. Press and word of mouth continue to expand its impact, as well as the quantity of new and returning customers.

Data shows the average person moves surprisingly often throughout their lifetime. That market and those dollars will be present for the foreseeable future. It seems Unpakt, and other services like it, will continue to take a larger piece of the pie thanks to their comparison models and competitive pricing. It might even kick “moving” out of the list of the top five most stressful situations in life. 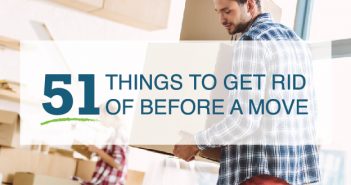 What to Get Rid of When Moving: 51 Things to Leave Behind