“We’d like to thank Deloitte for recognizing us for the second consecutive year for our advances in technology,” said John Fenn, co-founder and CEO of Budget Dumpster. “Innovation is foundational to our organization as it allows us to better serve our customers every single day.”

Budget Dumpster’s selection was based on a number of factors, including proprietary in-house technology that streamlines price-quoting for customers and a custom content management software that addresses Budget Dumpster’s specific digital marketing needs.

Fenn and co-founder Mark Campbell created Budget Dumpster in 2009 after identifying a serious gap in the quality of customer service in the waste removal industry. Since 2009, the company has seen annual double-digit revenue growth and has grown to employ more than 100 individuals.

“The Deloitte 2017 North America Technology Fast 500 winners underscore the impact of technological innovation and world class customer service in driving growth, in a fiercely competitive environment,” said Sandra Shirai, vice chairman, Deloitte Consulting LLP and U.S. technology, media and telecommunications leader. “These companies are on the cutting edge and are transforming the way we do business. We extend our sincere congratulations to all the winners for achieving remarkable growth while delivering new services and experiences for their customers.”

Established in 2009, Budget Dumpster delivers affordable waste removal services in most major markets throughout the United States. Working with over 250 local partners, Budget Dumpster sells thousands of temporary roll off dumpsters each week for projects big and small.

Based in suburban Cleveland with a growing team of over 100 employees, Budget Dumpster has been recognized as one of America’s fastest growing companies by the Inc. 500 (2016, 2017), one of the top five fastest growing companies in Northeast Ohio by Crain’s (2015, 2016), one of the largest waste and recycling firms in North America (No. 67 in 2016) and one of Fortune’s Most Flexible Workplaces (2016). Learn more about how we help people and companies each day at www.budgetdumpster.com. 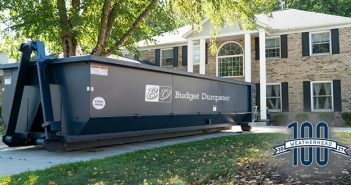 Budget Dumpster Named to Weatherhead 100 for the Sixth Year

Beautify Your Outdoor Space With These Backyard Landscaping Ideas

Our Top Driveway Border Ideas That Won’t Break the Bank