Call to Rent a Dumpster Today

Where Does Garbage Go?

What Happens to Trash After You Throw It Away?

The United States is the top producer of municipal solid waste, or MSW, in the entire world, generating about 268 million tons every year. So, where exactly does all that trash go?

Where garbage ends up varies widely between regions, states and even cities. The landfill is the most popular destination for solid waste, by a wide margin. Some cities, like San Francisco and Seattle, are able to recycle more than they send to landfills, but the majority of the U.S. sends their trash to the dump. Beyond landfills, waste in the U.S. also goes to recycling centers, composters and waste-to-energy plants. 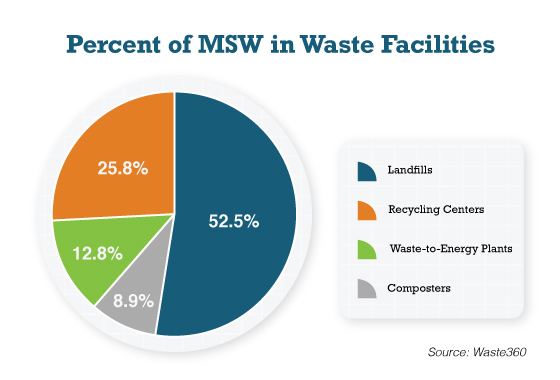 Where does trash go after you throw it away? Whether it’s picked up in a trash can, roll off dumpster or somewhere else, your garbage might make a few stops before it reaches its final destination.

Transfer stations provide a temporary location for garbage trucks to drop off their waste. Here, the trash is compacted and prepared for transfer. Then, it is loaded into larger trucks that will take the trash to its final destination.

Material recovery facilities, or MRFs, are locations where debris is sorted to separate useful materials from the waste stream before it reaches its final destination.

There are two types of MRFs – clean and dirty. Clean MRFs receive recyclables which have already been sorted by homes or businesses. Dirty MRFs process recyclable items that have been mixed with trash, which requires more manual labor for sorting. State-of-the-art MRFs incorporate a variety of technologies to recover recyclables, such as magnets, shredders and current separators (for sorting ferrous and non-ferrous metals).

Where Does Garbage End Up?

After our trash has made its way through compactors and sorting machines, it is taken to one of the following four destinations where it will be dumped, recycled or, in some cases, used to make energy. There are more than 3,000 active landfills in the U.S., and approximately 52% of our country’s garbage ends up in one of them.

What Happens to Garbage in a Landfill?

Landfills are designed to store waste, but not to break it down. They are made up of layers lined with clay and covered in a flexible plastic skin. Drains and pipes crisscross each layer to collect the contaminated fluid created by garbage. As a layer fills, it is covered with another sheet of plastic and topped with soil and plants. Eventually, garbage will decompose in a landfill, but the process is slow in this oxygen-free environment. Roughly 35% of all solid waste goes to either a recycling or composting facility. The goal of both recycling and composting is to reuse waste by turning it into new products. Recycling facilities generally focus on processing aluminum, plastics, paper and glass, while composters use food and agricultural waste to create compost for municipal and consumer use.

The most recent EPA waste and recycling statistics show that approximately 67.8 million tons of municipal solid waste was recycled in 2015, with the majority of the materials being paper. 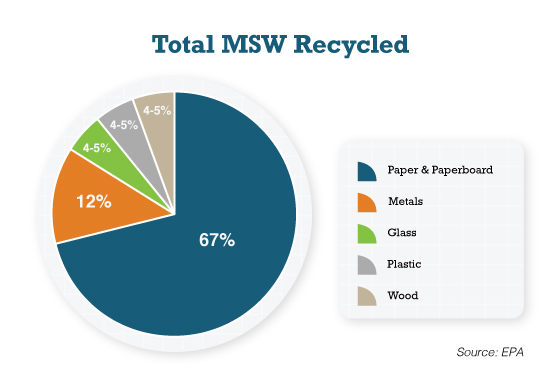 Trash incinerators are large industrial furnaces designed to burn municipal solid waste. They process 12.8% of national MSW. The primary combustion chambers of these facilities operate at a blistering 1,800 degrees Fahrenheit, which is hot enough to turn any amount of trash into ash.

This process reduces the original volume of waste by 95%, significantly reducing the amount of landfill space needed. Incinerating MSW also produces surplus heat that can be used to generate both heat and electricity. Another form of waste-to-energy conversion is through anaerobic digestion, a biological process using microorganisms to turn organic materials into energy and fertilizer.  This process takes place in large tanks called anaerobic digesters. They’re most commonly found on farms, where organic waste is readily available, though some accept food waste from restaurants, grocery stores and even entire communities. Wastewater treatment plants also use digesters to produce energy for the local power grid. Instead of using food or agricultural waste as a feedstock, wastewater facilities use organics-rich sewage.

So, where does trash go after you throw it away? As it stands today, the majority of our garbage ends up in landfills. However, this is expected to change over the course of the 21st century.

As recycling facilities and waste-to-energy plants become more cost-effective, cities are setting zero waste goals and individuals are working to reduce their carbon footprint. In addition, new waste industry trends shared by Waste360 demonstrate how technology developments can make disposal and recycling processes more efficient and prevalent across the country.

Since 2005, the United States’ annual MSW generation rates have plateaued while recycling rates continue to increase. If these trends continue, we can expect a decrease in the amount of garbage ending up in landfills over this next century.

You now have a better understanding about what happens to your trash, but do you know what you can and cannot throw away in the first place? Learn more about what you can throw in a dumpster.

First time renting a dumpster. Great customer service. They even put boards down to protect driveway. Everything went smoothly. Staff was helpful in explaining everything. Will recommend to others and definitely use again. Thank you for the great service! …

How to Save Money on a Home Renovation

Simple ways to save big when you’re remodeling on a budget.

How Home Insurance Works and When to Use it

Insurance is a necessity when you become a homeowner. It not only provides financial protection for your home, but also to your personal ...Read...

When it comes to purchasing a new home, what you see isn’t always exactly what you get. There are numerous red flags that can pop up wh...Read...

7 questions to ask when choosing a dumpster rental company. https://t.co/MXRng6hwQ6

#Decluttering advice: "Keep the memories, get rid of the stuff!” - @downsizinghomehttps://t.co/p14p6pObvD